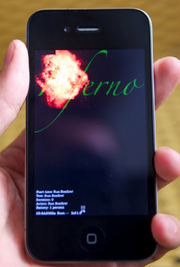 Inferno is a diagnostic utility commonly used in many internal NonUI firmwares. It runs a set of hardware and software checks predefined by PList files. It does not feature any on-screen buttons or ways of interacting with it, displaying only the word "Inferno" on a flame-type background. Sometimes debug backgrounds are also used, which are different from the standard one. At the bottom of the screen there is information about the device and operating system it's running.

Inferno is usually launched via the BurnIn application in later versions of 4.0 and beyond. It can also be launched via PC if the device is connected via USB SSH. The executable is located in usr/bin/local, alongside various other CLI internal tools. If launched like this it will display vast amounts of information.

It can shut itself down if device reaches critical temperature level. It can also be accessed in any firmware by passing the boot argument "inferno" to the device. Because development iBoots pass boot arguments to the kernel (unlike production variants), this can be done on any prototype device.

The following are pictures and documentation of prototype devices running known Inferno builds.