A software unlock is the process by which the iPhone is modified such that the baseband will accept the SIM card of any GSM carrier. This is entirely different than a jailbreak; jailbreaking one's iPhone does not unlock it. A jailbreak is, however, required for all currently public, unofficial software unlocks.

The legality of software unlocking varies in each country; for example, in the US, there is a DMCA exemption for unofficial software unlocking, but the exemption is limited to devices purchased before 26 January 2013 (so software unlocks for newer devices are in a legal grey area). See pages 16-20 of the copyright office's 2012 DMCA rulings for details. 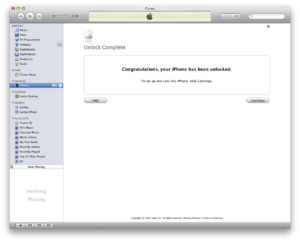 This is a way to unlock your iPhone for free with a package from Cydia, however, it only works on selected basebands. The unlock-able basebands and tools are listed below.

The first iPhone unlocking method (for the original iPhone) actually required opening up your phone.

Currently, it isn't possible to hardware unlock current devices; the closest thing would be SIM hacks, which function as interposers, not a hardware modification.

This exploit changed the lockstate table in the seczone to read unlocked and created a spoofed RSA token that was seen as valid by bootloader 3.9 (4.6 was not vulnerable to IPSF). It overwrote your previous token, which means the phone could no longer be officially unlocked, unless a restore of the token was performed from a previously made backup. Since the token isn't modified in a baseband flash, this unlock survived a baseband downgrade or upgrade. Apple attempted to combat this by requiring AT+CLCK command to be sent every startup. In a officially unlocked iPhones, lockdownd does this. In a late version IPSF phone, signal.app does this.

After the S-Gold 2 days, user land exploits are used to unlock the current devices and basebands, which are usually exploited with ultrasn0w, yellowsn0w, PurpleSn0w or Blacksn0w. Those Softwares exploited several injunction vectors, such as AT+XAPP, AT+XLOG or AT+XEMN