First seen on a cellular iPad 2 prototype, this firmware is a based off of an internal version of iOS 4.3. The device was originally discovered in an eBay listing. 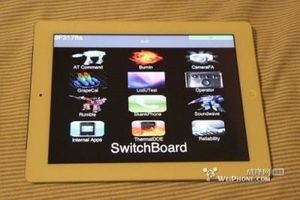 Unlike many firmwares before and after it, this firmware contains XInternalApps, a SwitchBoard alternative. This application is seemingly used for launching applications such as WifiRoot.

Upon booting into SwitchBoard.app, the user will be presented with the following applications: