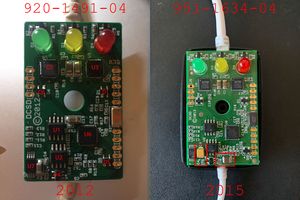 The DCSD Alex cable is used in factories to communicate over serial to run tests and write to the SysCfg (for serial definitions, etc) during production. These cables are produced by ShenZhen Alex Connector Co., Ltd. in China. They can be purchased from obscure markets. There are two known types of DCSD cable. An older one, with lights and only one USB female USB connector, and a newer model, which lacks lights, and has two female USB connectors.

Top of the board items of interest

Back of the board items of interest

This cable is made specifically for USB-C devices such as the newer models in the iPad Pro line, this cable also supports USB 3.1. USB connection from the main board splits out into a Y-style cable but turns back into one connection in the USB-A male connector .

Top of the board items of interest

Back of the board items of interest

There's not much on the back of the board that you couldn't technically see from the front, no ICs or anything of interest really. 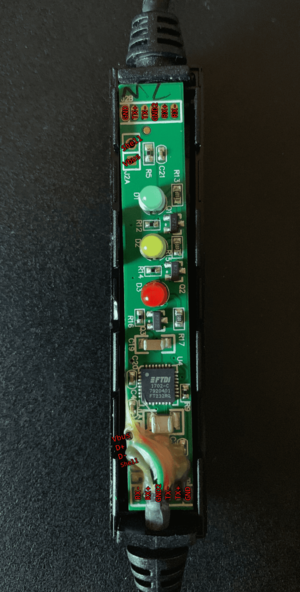 Annotated photo of the DCSD 3.1 PCB

One use of the cable was to view verbose boot. You could access this by setting debug uarts in iRecovery or nvram, however, since iOS 9, this output has been obfuscated.

Using qwertyoruiopz's serialsh, it is possible to get shell over serial. This is useful, because it does not require any additional daemons other than those shipped with iOS. An example use case for this would be protecting against bootloops.

Using the DCSD cable, it is possible to attach GDB to the iOS kernel, and pause it's running.