From The iPhone Wiki
(Redirected from AppleTV2,1)
Jump to: navigation, search 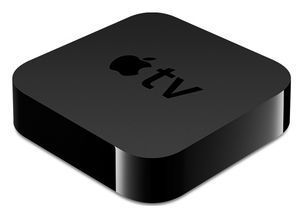 This is the Apple TV (2nd generation).

The second-generation Apple TV, a digital media receiver made and sold by Apple Inc., was unveiled during an Apple press conference on 1 September 2010. It is a small form factor network appliance designed to play digital content originating from the iTunes Store, Netflix, YouTube, Flickr, MobileMe, Online Radio or any Mac OS X or Windows computer running iTunes onto an enhanced-definition or high-definition widescreen television, and will accept music, video and photo streams from other iOS devices using AirPlay in 4.2. It sold 250,000 in its first two weeks available.

After being jailbroken it can stream music from last.fm, browse the web, show RSS feeds, use the PLEX Client and run most previous iOS terminal applications via SSH until a local terminal application is created. The name used in firmware is AppleTV2,1.

It uses the S5L8930 application processor.

The Apple TV (2nd generation) uses the dual-band BCM4329 for Bluetooth and Wi-Fi communications; it supports 802.11 a/b/g/n on both frequencies (2.4 GHz and 5 GHz). Bluetooth is not enabled natively but can be used through BTStack to support the use of bluetooth keyboards.

AppleTV.app is the application running on the Apple TV with iOS 4.2 or higher. Up to iOS 4.1 it was Lowtide. It is essentially an updated "FrontRow" system that handles all user interaction, video playback, streaming, etc. It has been shown to run on other iOS hardware such as the iPod Touch. It is the only application on the device and is the equivalent of the SpringBoard application on other iOS devices. FRAppliances can be added to the /Applications/AppleTV.app/Appliances folder on a jailbroken device to enable more functions. (/Applications/Lowtide.app/Appliances on 4.1 and below)

Interestingly, the Apple TV (2nd generation) has a predetermined spot that is apparently for a 30-pin dock connector. This is most probably here for Apple's in-house developer units.

Soldering to the dock terminals on pins 2 and 3 failed to get analog audio out. It is not known if this is because of a hardware or software limitation. Sound was able to be produced out of the HDMI port but no sound came out of the dock pins corresponding to audio out on other iOS devices.

Currently, the NitoTV Take 3 release for the current generation Apple TV provides a Weather Forecast and an RSS Reader application within it's own Frappliance wrapper. Its developer has stated that these first two applications were intended as Proof-of-Concepts, as well as serve as a testbed for further development for the iOS-Based Apple TV.

For more information regarding the state of development, as well as get an installation guide for installing NitoTV to your Apple TV (2nd generation), please see: http://wiki.awkwardtv.org/wiki/NitoTV_Take_3