PurpleSNIFF is a tool made by Apple to read identification and diagnostic information from the device. The tool is used by Apple engineers as well as factory workers at Foxconn/Pegasus. It's included in the RestoreTools.pkg.

Like iTunes, PurpleSNIFF communicates with iDevices using a usbmux connection.

PurpleSNIFF displays the value of all keys accessible by liblockdown and mobilegestaltd. Data is broken into categories: 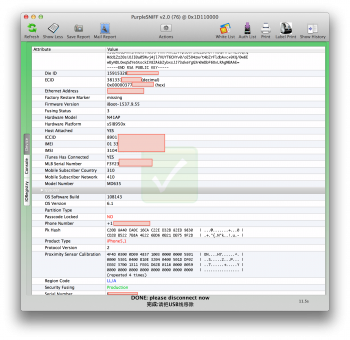 "Request White List Authorization" composes a new email to whitelist-request@group.apple.com. This address is only reachable from within Apple VPN, and does not accept outside senders. This feature allows a factory worker or Apple engineer to request that the device be SIM-unlocked for use on certain carriers.

"Request Personalized Install Authorization" composes a new email to authlist-request@group.apple.com. As with White List, this email address is only reachable from within Apple VPN. This feature allows a factory worker or Apple engineer to request special firmware personalization for their device. This is useful because Apple could order prototypes of unreleased iPhones but refuse to sign any firmware for them. This way, if the devices are lost/leaked into the wild for some reason, the device is bricked. When prototype phones arrive safely/securely to Cupertino, engineers can have them activated for firmware personalization through this mechanism. It is not known if approved requests permit firmware signing on the public or internal (VPN-only) TSS server.

The other main tabs of the application reveal the live Syslog and the IORegistry hierarchy. Menu options include commands to enable extra logging, reboot devices (with optional prompt), obliterate and reset them, read diagnostic data from GasGauge, WIFI, and NAND, query MobileGestalt directly, enter and exit recovery, and "Lookup Device" in PDCA. It can also pull logs off of the device, as well as content in var/mobile/library . The log archive can be huge because it includes data like the SMS database and all MMS attachments).