From The iPhone Wiki
(Redirected from Apple TV 4K)
Jump to: navigation, search

The Apple TV 4K makes use of the Apple A10X processor.

Hidden behind a small trapdoor in the back of the Ethernet port is a debug port that includes USB access.

Without a custom cable the easiest method of access to the port is to solder directly onto the pins. Care should be taken with the test points that are near the port as they also serve as the top of the via that connects the debug port to the rest of the Apple TV. USB access is enabled by setting the voltage on the mode pin to either USB device mode or assert force_dfu mode. While in DFU or recovery Apple's firmware does not care about the mode pin state and always enables USB. In assert force_dfu mode the Apple TV will enter DFU on every boot. 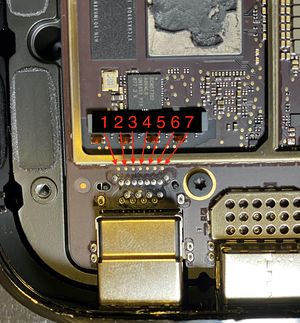 Pin 6 in the debug connector is a mode select pin. There are 4 known modes available.

USB Device mode is active from 0.5-0.99V After 0.99V the device will enter a reset loop. Force_dfu is asserted with voltages above 0.76V, and will enter DFU on reboot. To trigger a reboot and enter DFU from the port alone without an external reboot requires first raising the voltage about 1.01V then dropping it no lower than 0.76V. The transition between each mode results in metastability for ±10mV from the transition point (0.50V, 0.75V, 1.00V) between modes.