From The iPhone Wiki
(Redirected from AppleTV3,2)
Jump to: navigation, search 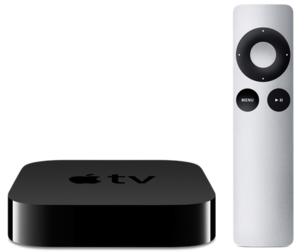 There are even less internal changes this time.

This is the revised version of the original Apple TV (3rd generation), also known as the AppleTV3,2. This was released on 28 September 2013 alongside iOS 6.1 (5.2 for Apple TVs).

An Apple spokesperson told The Next Web that the only differences between this and the original were "component changes… [that] don’t affect product features."[1] Although the feature set is mostly the same, there is one small addition: the AppleTV3,2 supports peer-to-peer AirPlay.