From The iPhone Wiki
(Redirected from ADP3,2)
Jump to: navigation, search 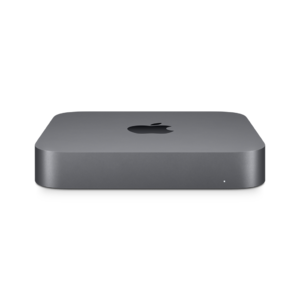 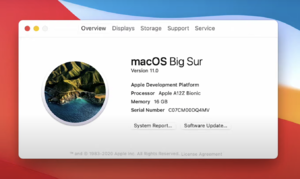 The Apple Developer Transition Kit (DTK) is an ARM-based Mac released exclusively to registered developers on 22 June 2020. The kit takes the shape of a Mac mini (2018), and was designed to aid developers in the transition from Intel (x86_64) to Apple silicon (arm64) processors as part of the Universal App Quick Start Program. The program costs 500 USD, and supplies a Developer Transition Kit that must be returned after 1 year, or if Apple decides to recall all DTKs. Joining the program requires signing a non-disclosure agreement (NDA) that limits the public demonstration of the DTK, running benchmarks or other performance measurements of the machine, or disassembling it. The DTKs were recalled and asked to be returned by 31 March 2021. Upon return of the DTK, the developer receives a 500 USD credit towards the purchase of other Apple Devices. Originally, it was going to be 200 USD, could only be spent on M1 machines, and would expire 31 May 2021, but these terms were changed after backlash from the developer community.

It shipped with macOS Big Sur Beta 20A5299w, a build made available specifically for the DTK. Like the M1 Macs that came after it, Developer Transition Kit contains a recovery mode accessible by pressing and holding the power button at boot. It also contains a DFU mode it can fall back to or be entered into.

The Developer Transition Kit has a model ID of ADP3,2, and model number of A2330 (EMC 3568), J273a. This is the variant that was seeded to developers. It reports to macOS as "Apple Developer Platform".

In the macOS 11 Big Sur IPSW, there exists references to a variant of the Developer Transition Kit, model ADP3,1 / J273, which has a nearly identical DeviceTree to ADP3,2; the only differences are that it reports as "J273" instead of "Apple Development Platform", and only has 6 GB of RAM, like the iPad Pro 2020, instead of 16 GB, which Developer Transition Kit ADP3,2 has. Whether the external appearance is the same or not is unknown.

In there also exists a model, T485, which is a completely unknown model, with an A12Z processor and a display. Its DeviceTree varies considerably from the iPad Pro (2020) DeviceTree. It is not known what this device looks like.

The Developer Transition Kit (2020) makes use of the Apple A12Z Bionic SOC.

The Developer Transition Kit can be interfaced by plugging a cable between the USB-C port on the right and another computer. In iTunes on Windows and Apple Configurator on macOS, it is displayed as an iPhone in DFU mode.

The Developer Transition Kit also has a functional UART interface from the USB-C port.

The Developer Transition Kit contains a working version of Rosetta 2, Apple's binary translation layer that allows Intel applications to run as-is on ARM Macs. However, the A12Z, unlike A14, doesn't support 4 KiB memory pages, meaning most 3rd party web browsers like Chrome and Firefox stopped working. Both Chrome and Firefox released fixes that allow it to run under Rosetta 2 on the DTK platform. Many Electron apps, and apps using older versions of the Chromium Embedded Framework will not run or load pages on the DTK.

According to the DTK Release Notes, recovery cannot reinstall macOS. You need to hook up to another Mac with Apple Configurator 2 to reinstall the OS.

Thunderbolt 3 is apparently built into the DTK, but is not enabled or working for various reasons. Only DisplayPort or HDMI display outputs will work, not Thunderbolt. As a result, the Pro Display XDR can only run at 5K instead of 6K.

External GPUs are not supported on Developer Transition Kit, nor M1 Macs for that matter.

The system fan runs at a constant speed, regardless of processor load.

Possibly due to a faulty SMC or other drainage issue, the coin-cell battery only lasts for 6 months. Given that DTK users are not allowed to disassemble the machine, this means that the RTC will permanently stop working after that time.

Hypervisor.framework does not work on the DTK. This means that the acceleration needed to run, for example, virtual machines, is missing, so something like Windows 10 would run absolutely terribly.

Apple Watch unlock does not work

Apple Pay does not work

If the OS is hung, pressing and holding the power button to shut down does not apparently work.

What's in the box

Watch a reupload of the AppleInsider DTK unboxing video

The future of Mac
is yours to write.

Congratulations on being one of the first
developers for Mac powered by Apple silicon.

Go to developer.apple.com/mac to find
everything you need to get started.