Difference between revisions of "Talk:Main Page/2011"

From The iPhone Wiki
< Talk:Main Page
Jump to: navigation, search

Does anyone else think we should organize them so there is the piece at the top that says who they, what team they are/were in, and other basic info. Then have an Achievements section below it stating what they have found/released? Just a thought. --JakeAnthraX 17:14, 4 January 2011 (UTC)

Possibly. I should note that to my knowledge, Apple never actually used the "iPod touch 2G" and "iPod touch 3G" monikers, but the iPod community has used such names for a long time. --Dialexio 04:24, 11 February 2011 (UTC)

I lately have been dealing with older firmwares and I couldn't find anywhere with the programs I needed. We should dedicate a page to archiving previous releases of tools (e.g tools for 3.X). Anyone care to set it up? --JakeAnthraX 09:45, 27 March 2011 (UTC)

Well, for 3.x firmware we still have the page Jailbreak. Also on the respective tool page it should be listed what firmware is supported. For a list of all tools, see Category:Hacking Software. But yes, maybe we should have a general jailbreaking tool overview page, like the one in my first mentioned link, but for all devices (including iPhone 2G) and all firmware (including pre-3.x)? Feel free to create such a page if you think we need it. --http 12:38, 27 March 2011 (UTC)

Ok, now I understand. You mean something like this Where do I download greenpois0n?. This wiki cannot host binary files, but I can add all files to my site Jailbrak FAQ. As long as I don't get hammered with downloads, it should be no problem (currently hosted by a friend at home). --http 21:52, 27 March 2011 (UTC)

I am working on a project in which I want to use the Dock connector's serial lines to communicate with an external device. Since Apple makes this very difficult (tried to get into the MFi program with no luck), I found that I probably need to jailbreak the device in order to use these lines directly.
Finding help in the www was quite disappointing so far (the one by Collin Meyer is quite outdated). So when I figured a few things out now, I'd like to share them. I'd post explanations on how to use these lines on the Dock and how to program them.
I wonder if this is the right site for such information. The main page claim to be about _anything_ iPhone, but all I find so far is Jailbreak-related. So, what is this about? Shall I post my findings here or do they better fit somewhere else, e.g. the iphonedevwiki? Sadly I can't sign up with iphonedevwiki, either. Gosh, why is it so hard to find a place to share programming on jailbroken devices? Any other suggestions, please?
--Tempelorg 13:41, 21 June 2011 (UTC)

Please explain that it's currently not open to new sign-ups

Hi, thanks for helping me get an account here. I had wanted to sign up and found that it didn't work - without any explanation why. Eventually I managed to get in contact with one of the sysops via Twitter and was told that it was closed because of spammers taking over.
It would be nice if you could add a little note on this on the main page. There it still says that anyone can join. That should be changed. Maybe even with a hint at how someone could still sign up by contacting someone, if he can explain why he needs to be in.
--Tempelorg 13:03, 21 June 2011 (UTC)

Mediawiki has been upgraded to 1.17, post here if there are any problems. Thanks everyone for continuing to support this wiki, and thanks Dialexio and http for their excellent moderation(also props on the new table) --geohot 22:46, 15 July 2011 (MDT)

A couple of things in general, I would really like to see higher quality content here, I wish http://iphonedevwiki.net/ would merge with us to get a good dev side of things. Also http://www.idroidproject.org/ could move here. This is a fairly reliable website that's been around since 2008. Tons of stuff should be filled out that isn't, stuff about all the sandboxing crap added to kernel...etc. If you know someone able to fill it out, poke and prod them to get them to do it. --geohot 23:01, 15 July 2011 (MDT)

I kindof did, here it is: File:NewLogo.png I can create a new one with The iPhone wiki, but I think that is already there. As for the apple favico, could we use File:Apple-logo.png? Convertico.com will create an ico file for you from a png --5urd 23:29, 15 July 2011 (MDT)

I'm getting kind of sick of looking at it, as those things will probably never be done. Anyone want to be bold and replace it with a nice colored jailbreak/unlock status for each device on the latest version(include newest jailbreakable/unlockable if latest isn't). I'd do it but I'm lazy and don't know mediawiki. --geohot 07:40, 4 July 2011 (UTC)

Good start. I would change this: a) iPhone 4 can be unlocked (mine is). This is not mentioned (requires baseband 1.59.00) b) I thought of having a table with one row and each column represents a device with its status (group some together). Maybe a second row for unlock. c) Instead of Firmware page, I would link to Jailbreak page (and Unlock page, but that's outdated). --http 20:16, 4 July 2011 (UTC)

Google Chrome! It is because of all of the other stuff on the left two columns and your screen res. IF it could be summarized better, it world look better. --5urd 23:23, 5 July 2011 (UTC)
It's because your on a device with a smaller screen, with a low resolution you can't fit as much content, looks just fine on mine. --GreySyntax 23:28, 5 July 2011 (UTC)
Yup, it's the screen resolution. To accommodate smaller screens better, I made a few more tweaks to the table, so it should look better on screen resolutions as low as 800x600. --Dialexio 23:42, 5 July 2011 )(UTC) 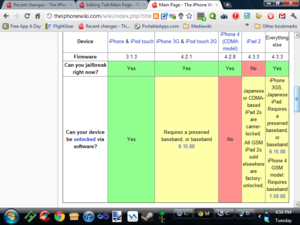 All right. I changed the cell widths to use percentages instead of pixels, and the table appears great on low-res and higher-res screens. :) --Dialexio 00:54, 6 July 2011 (UTC)

Dialexio, I would suggest some more changes to the jailbreak table:

Just curious: why is p0sixninja not listed under the Hackers section on the front page? He's one of the main faces of the jailbreak scene now, and even though he hasn't made a whole lot of significant contributions like the group listed, I think he still deserves a spot on the front page. --Vexenon

4S not listed under processors

It has come to my attention that the iPhone 4S is not listed under the heading Application Processors. Thanks for your time. Werl 12:39, 17 October 2011 (MDT)

Rest in peace, Steve. You will be especially missed by us here at The iPhone Wiki, as without you, we wouldn't have the iPhone, the iPod, or the iPad, and we wouldn't be hacking them. You were a true genius, a true visionary, and most of all, the best person this world has ever seen. Thank you, Steve. --rdqronos 18:28, 5 October 2011 (MDT)

As I recall, an edit war kept breaking out in the "Hackers" section. I gave a warning that the next time an edit war occurred, it would be protected for three years.[1] --Dialexio 10:04, 20 November 2011 (MST)

What about moving it (and the header of the next one to keep people from placing it below the {{Main Page/Hackers}}) to Main Page/Hackers and protecting that page? --5urd 13:13, 20 November 2011 (MST)

I don't think we should have to edit the main page enough to branch it off like that. We should keep things organized rather than making new pages. --Jacob 14:05, 20 November 2011 (MST)

I agree with Jabob. If Dialexio is not so lazy like I am in the last few weeks, valid change requests on the page Talk:Main Page (here) will get implemented within a day or so. --http 17:41, 23 November 2011 (MST)

Guys, on the Main page, we can find a coloured board showing wich devices can be jailbroken and untethered. Well, I don't know how to change, but there is an error. The iPhone 3GS OldBootrom can be jailbroken and untethered with the 24kpwn exploit. The board shows that any version of the 3GS are not succeptible to untether at the moment. If I'm right, please someone change and delete this post. --XiiiX 16:12, 23 December 2011 (MST)

Do we have a TODO List? People could put things there to make more people understand the priorities of now. --XiiiX 18:42, 23 December 2011 (MST)