Difference between revisions of "Star" 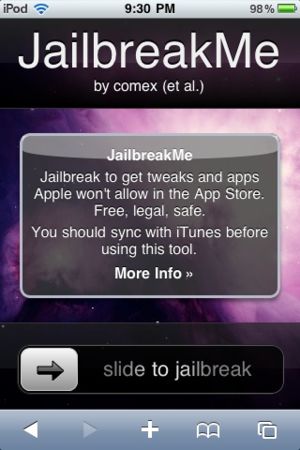 Star on an iPod touch 2G.

Because this jailbreak revealed a new major security hole in iOS, it could also be adopted by rogue developers to create malware to take over your iPad/iPhone/iPod touch. Therefore it is highly recommended to install the patch saurik released via Cydia in order to keep your device safe.

First, the process uses the PDF Compact Font Format vulnerability (CVE-2010-1797). To our surprise, it’s a simple stack-based buffer overflow. With this vulnerability, an overly long CFF charString entry ends up with attacker-controlled $pc. Many people think of Return Oriented Programming (ROP) as a rather immature technique to use for complicated jobs. But the jailbreakme shellcode uses ROP to execute more than a total of 150 API calls. This means non-executable memory is not a defense against these kinds of memory corruption attacks. Looks as if the current ROP technique for iPhone exploitation is very mature and stable.

The ROP payload actually abuses an undisclosed kernel vulnerability residing in an IOSurface component from Apple. It seems that the vulnerability allows a normal process to have access to kernel memory with write privileges. After it modifies kernel space data to circumvent security checks, it calls “setuid(0)” to get root access. So, the game is pretty much over at this point. The Safari process at this point has root user privileges, and it can do whatever it wants.

After this exploitation phase, it drops the “installui.dylib” shared library, loads it, and executes the “iui_go” function from the library. This allows some UI text to be displayed on the user’s screen to ask whether to go forward with jailbreaking. Then it downloads the “wad.bin” file from the jailbreakme site and extracts necessary files like “install.dylib” from there, and then executes the “do_install” function from there, which will do the typical jailbreaking process. All these operations are possible because the Safari process has root access acquired using the kernel bug.

The jailbreaking phase involves something like moving some system directories and modifying essential system files like “/etc/fstab”. Also it directly accesses the “/dev/kmem” device to patch kernel flags or code. And finally it installs the “Cydia” installer package and restarts SpringBoard using the “uicache” command.