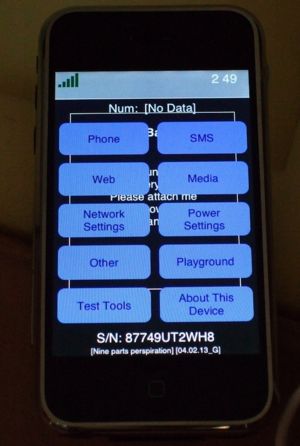 SkankPhone on an iPhone. Text in the background is a UI rendering error warning about a low battery level.

SkankPhone is a part of Apple's internal debug utilities suite. It can be defined as a SpringBoard alternative. Instead of dividing the iPhone OS functions such as Phone, Safari, etc. into standalone applications, Apple developers combined many functionalities into one app. SkankPhone has a integrated phone, web browser, music player and SMS editor. Pressing Home Button reveals a toolbar with 5 shortcuts to other SP sections: Phone, Web, SMS, Music and Setup. In Alpine 1A420 prototype firmware it also had a built-in Operator screen.

SkankPhone was a notable part of Non-UI firmwares from versions 1.0 to 5.1. It's last appearance was on prototypes running 5.1. Versions 6.0 and above no longer feature SkankPhone, for unknown reasons.

SkankPhone does not depend on SpringBoard, SkankPhone can live with or without it. It is not like a regular UIKit application, in this way, it is not linked with UIKit and uses it's own custom framework. SkankPhone's framework located in it's application bundle named SkankKit, this is small UIKit replacement. SkankPhone is launched by a daemon. Somewhere in this process SkankPhone unloads SpringBoard's daemon, this kills SpringBoard while giving SpringBoard no way to respawn.