Difference between revisions of "S5L8950" 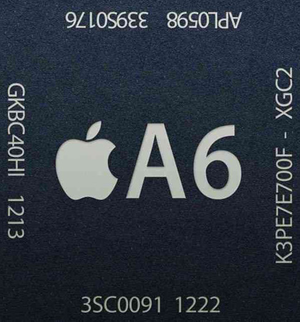 The S5L8950X is the Apple A6 processor currently used in the iPhone 5 and iPhone 5c.

The A6 part number is APL0598. It is produced by Samsung with its low power 32nm CMOS process. The die has an area of 95mm². It incorporates a three core PowerVR SGX543MP3 GPU clocked at 266MHz.

The chip contains Bootrom 1145.3. It runs ARM based instructions with the CPU Instruction set ARMv7s. The exact ARM reference has to be determined yet.

There are no known exploits.