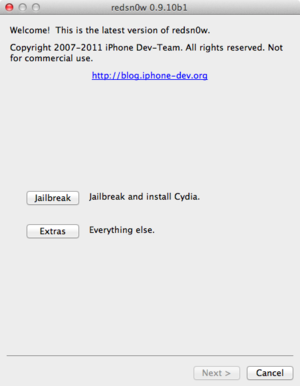 Version 0.9 beta 3 was released for Windows and OS X, and it allows firmware 3.0 to 3.1.2 to be jailbroken. It includes support for all devices except the iPod touch 3G and supports a tethered jailbreak on late-model iPhone 3GS's and iPod touch 2G's. This latest version supports custom boot and recovery mode logos, as well as verbose-bootup. Final release, version 0.9.2 supports jailbreaking of all iDevices with firmware 3.0 or 3.1.2 on Windows and Mac OSX and iPhone 2G/3G, iPT 1G on firmware 3.1.3. Version 0.9.3 adds support of internet tethering IPCC hack on those devices and 0.9.4 allows jailbreaking of early iPod Touch 2G with 3.1.3 firmware.