Difference between revisions of "K48AP" 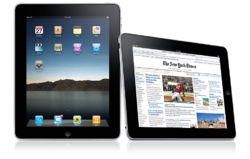 This is the first generation iPad. It was announced on 27 January, 2010, and initially ran unique versions of iOS (3.2.x). The name used in firmware is iPad1,1.

For cellular data communications, the first generation iPad uses the X-Gold 608 baseband chip, which is also found in the iPhone 3G and iPhone 3GS.

The iPad uses the BCM4329 for Bluetooth and Wi-Fi communication.