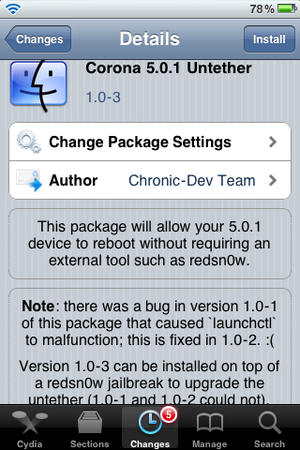 The details page for Corona in Cydia.

Corona is a Cydia package from the Chronic Dev Team on Saurik's repo. It uses pod2g's Racoon String Format Overflow Exploit and an HFS Heap Overflow to untether iOS 5.0.1 on previously-jailbroken devices. Alternatively, users can also re-run the iPhone Dev Team's redsn0w 0.9.10 to untether their jailbreak with the same exploit. The name is an anagram of the aforementioned racoon software.

According to pod2g's blog, he was having problems with the app sandboxing system used on the A5 processor in the iPad 2 and iPhone 4S, so he got planetbeing, MuscleNerd, Joshua Hill and saurik, dubbed the "dream team", to help to fix it[1][2]. Dustin Howett also demoed the A5 jailbreak on YouTube. It was released on January 20, 2012 as Absinthe.