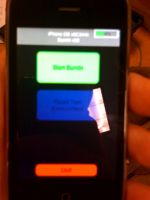 An anonymous source has informed me that this is how it works. Apple restores a special firmware to the iPhone, but it is based of a regular firmware. At boot, /AppleInternal/Applications/SwitchBoard/BurnIn.app/BurnIn will run. It checks /AppleInternal/Diags/purpleskank/config.plist for configuration information, such as version (1.3.0 in this case), where to store the logs (/Library/Logs/BurnIn/ in this case), what level to set the backlight to, and also, some kind of cleanup script is defined (/AppleInternal/Diags/Utilities/burnin_cleanup.sh). What it actually does is still not known though. Two log files are also left by it, by doing whatever is done :P They are /Library/Logs/BurnIn/burning_log.xml and /Library/Logs/BurnIn/burnin_log.txt.

The day of the launch, a shitload of Ipod Touches shipped with burnin on it. In order to get it off them, you just did a restore. A few of these were sold on Ebay.