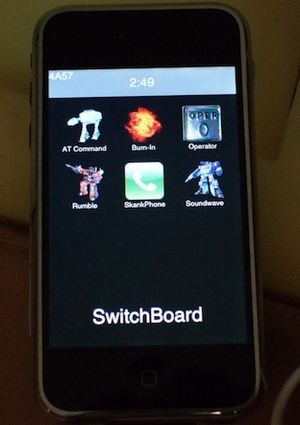 Alpine 4A57 is a prototype firmware found on an iPhone Prototype discussed on macrumors. According to a photo of it, it was an internal version of iPhone OS 1.1.3.

Unlike previous builds, this one seems to not be as reliant on SkankPhone and also has SwitchBoard.app. Upon booting, the user can choose from six applications:

Instead of restoring via a ramdisk, the restore tools appear to be right in the OS, suggesting restores were originally performed through userland.

Flashing 04.02.13_G on a retail iPhone can be done with bbupdater, but results in loss of Carrier Network connectivity.