Difference between revisions of "25C3 presentation "Hacking the iPhone""

This was a presentation held on the 27 December 2008 at the 25th Chaos Communication Congress (25C3) in Berlin. Speakers were pytey, planetbeing and MuscleNerd.

The presentation explained the inner workings of the iOS architecture, its security, and how it was circumvented. Short event description

During the presentation MuscleNerd wanted to show the video of a live demo of the unlock with (yellowsn0w), but skipped it because of the missing time. This video was actually released some days before.

The presentation slides are currently not available. Maybe one of the presentators can upload them here or post a link.

Transcript of the presentation 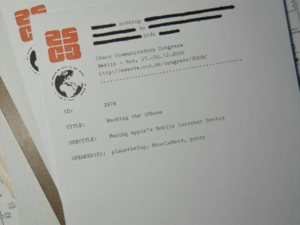 Good evening everybody. I would like to introduce the iPhone Dev Team who are here to give a talk on iPhone hacking. So if you join me to give a round full of applause please.

Good evening ladies and gentlemen. Here’s a little slide show here for you. 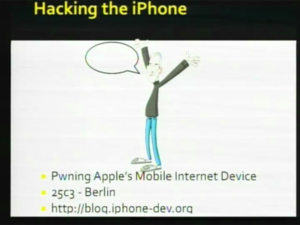 This is a slide called hacking the iPhone. I’ll give a little history here about our little crew. 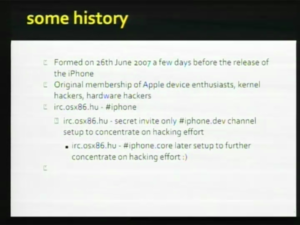 We formed in June 2007, just before the release of the original iPhone. We’re original hardware hackers and device enthusiasts, based around Apple products and we sort of rather say towards the iPhone as a platform. We exist on IRC. This is the first time most of us have met each other. Originally there was a couple of channels on the osx86.hu server.

We’ve got a wide membership: Germany, Belgium, France, Russia, Hungary, USA, Israel. And during those initial few months of the iPhone first generation DHL and FedEx shipped around a lot of US phones to us. We’ve got some statistics here of our little site. We’ve had about 1.7 million visits in the last month. Fifty, sixty thousand unique visitors per day and various networks around. We’ve got a tool called Pwnage tool and another tool called QuickPwn which is viewed here as the next good project. It’s a Cocoa application. It’s got 20,000 lines of code. QuickPwn has got 15,000 lines of code. There’s also other platforms: Windows and Linux as well. We’ve had 3.6 million Sparkle updates since we last deleted our logs, which was in the 16th of July. We try to release patches when Apple releases an iPhone update. We try to get patches out 24-48 hours after the release of those updates. And the modular bundle sets for cross-platform use. We sparkle for updates for the Mac platform, as I mentioned. An interesting lead: There’s a 180 very active users from Apple who update their QuickPwn and Pwnage tool on a regular basis, so I think they like our software, which is pretty cool. Thank you very much Apple. (big applause)

I’ll just introduce my colleagues here. We’ve got bushing on the end. He’s one of the guys. This is MuscleNerd (laughter) - I don’t know why. This is planetbeing. And we’ve got a bunch of other guys here we don’t want to be identified for obvious reasons, but they’re over there wearing Pwn-Apple T-shirts. And they speak Russian. (laughter) Say hi guys! (applause)

So with that further I’ll hand you over to planetbeing who’s gonna talk a bit about the applications processor side of the iPhone. Thanks.

Just briefly I just mentioned stuff that Apple did wrong, to make the job easier for us and probably the biggest reason is that instead of rolling out all this wonderful security mechanisms at once, they did it piece by piece and they sort of made a few mistakes early on in the process. And by doing so they allow us to get access to pieces of code and we’re able to reverse engineer it and we were able to figure out how it all worked and where the vulnerable points are and how to attack it. One of the early mistakes is in 1.0.2. The iPhone actually trusted iTunes which we can modify easily. At that point we could actually send custom restore commands and jailbreak the iPhone. Another call was none of the executables were signed at that point, so you could make a simple file system alteration and you’re jailbroken. Another vulnerability in 1.1.1 and 1.1.2 is that everything used to run as root. So if you find a vulnerability within any userland program, then you have root. They also left some interesting things like /dev/kmem which means that we can poke and peek kernel memory and execute kernel code, so that was kinda bad. And finally probably the mistake that first allowed Pwnage was they left the boot arguments pmd= and vmd= and these boot arguments can construct a Ramdisk to boot out of anything. And that basically out of any contiguous portion of memory. And that allowed us to bootstrap a Ramdisk pretty easily, because when we upload a Ramdisk - the iPhone has to store in memory somewhere – and then signature check and then decide whether it wants it pass on to the kernel based on whether the signature is correct. But even if it fails the signature check, the Ramdisk is still in memory, so we can use pmd= or vmd= to construct a Ramdisk out of that portion of memory that it temporarily stores or upload in. And then this basically allowed us to boot from an unsigned Ramdisk right away. And allow us to flash our first bootloaders. We learn a lot from this process. We now have added quick control over the iPhone’s hardware to even run Linux on it, so that’s basically where we are. I’ll pass it to Musclenerd to describe the Baseband Firmware.